Owning a survival knife these days can be one of the best decisions you ever make, especially if you indulge in wilderness expeditions. Truth be said, survival knives have been around for quite some time now and although they’ve had numerous technological improvements the basics remain the same for these cheap knives.
If you ever happen to find yourself in the wilderness, these survival knives will be paramount to your survival; they can be used for anything from animal skinning to animal killing all the way down to wood cutting and carving.
Below, we’ll list out the top ten survival knives for campers and outdoorsmen:

This  knife is 10.5 inches long, not only is the knife lengthy, it features a 5mm thick stainless steel blade, the knife itself is 5.5 inches in length, measuring a little over half of the knifes total length.
Enough talk about the blade, let’s move on to the handle, the handle is not only a brown coated handle, it is also coated in nylon fiber.
Very few knives come close to rivaling this beast, while wielding this knife an average adult can bet bring down a 350+ pound opponent, if used  correctly this knife can and will be a beast. 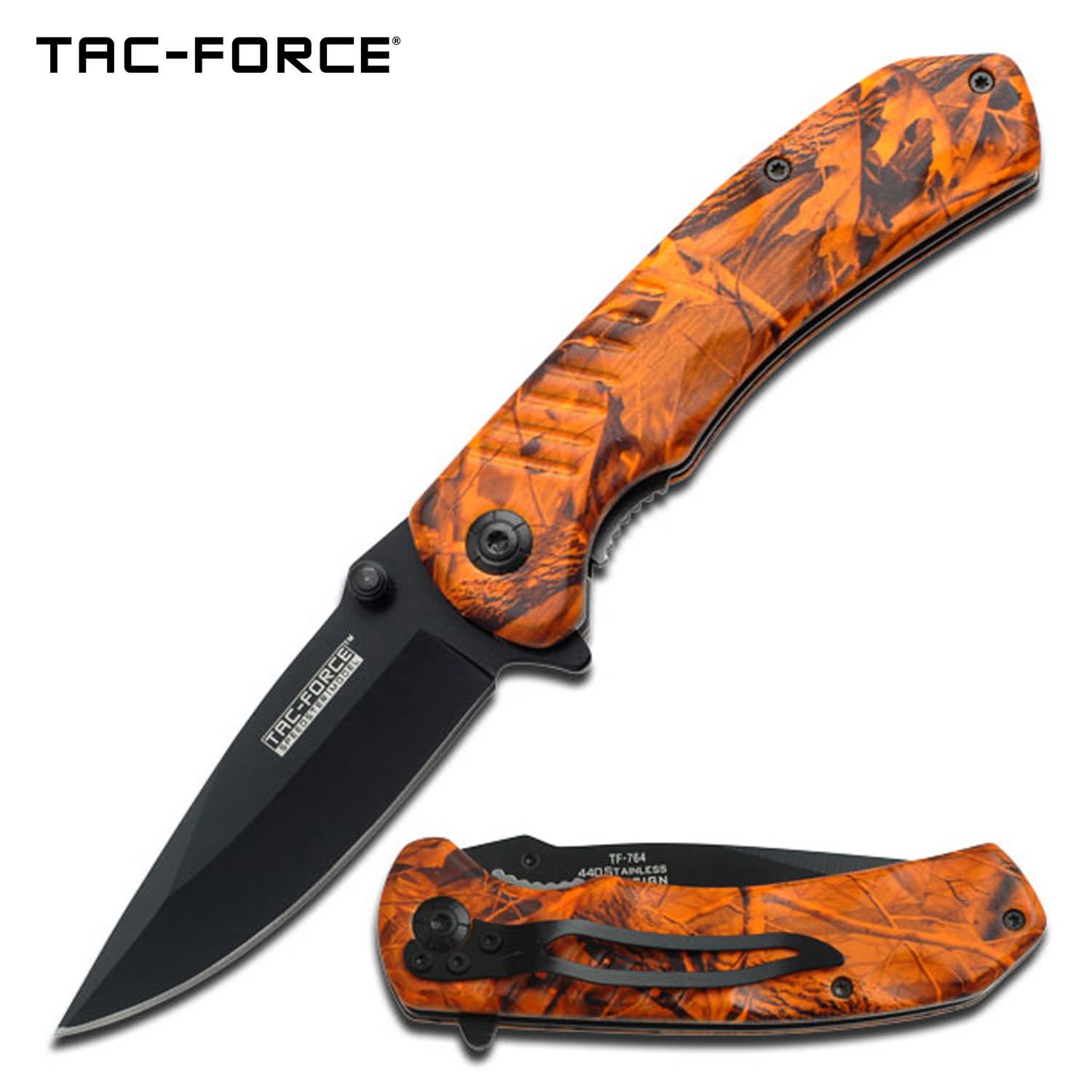 This survival fixed blade hunting knife is sure to make you happy, it’s overall length measures in at 11 inches, this knife has a full tang construction, not only that this knife has a blade length of 6 inches, this blade is made of 440 stainless steel, why Grade 440 stainless steel?
This particular grade was chosen due to the fact that it contains more carbon. In the business of steel, more carbon correlates with increased hardness and more edge retention
That’s not all; this knife comes complete with a nylon sheath that aids in keeping your prized possession safe and makes it easier to carry around with you. 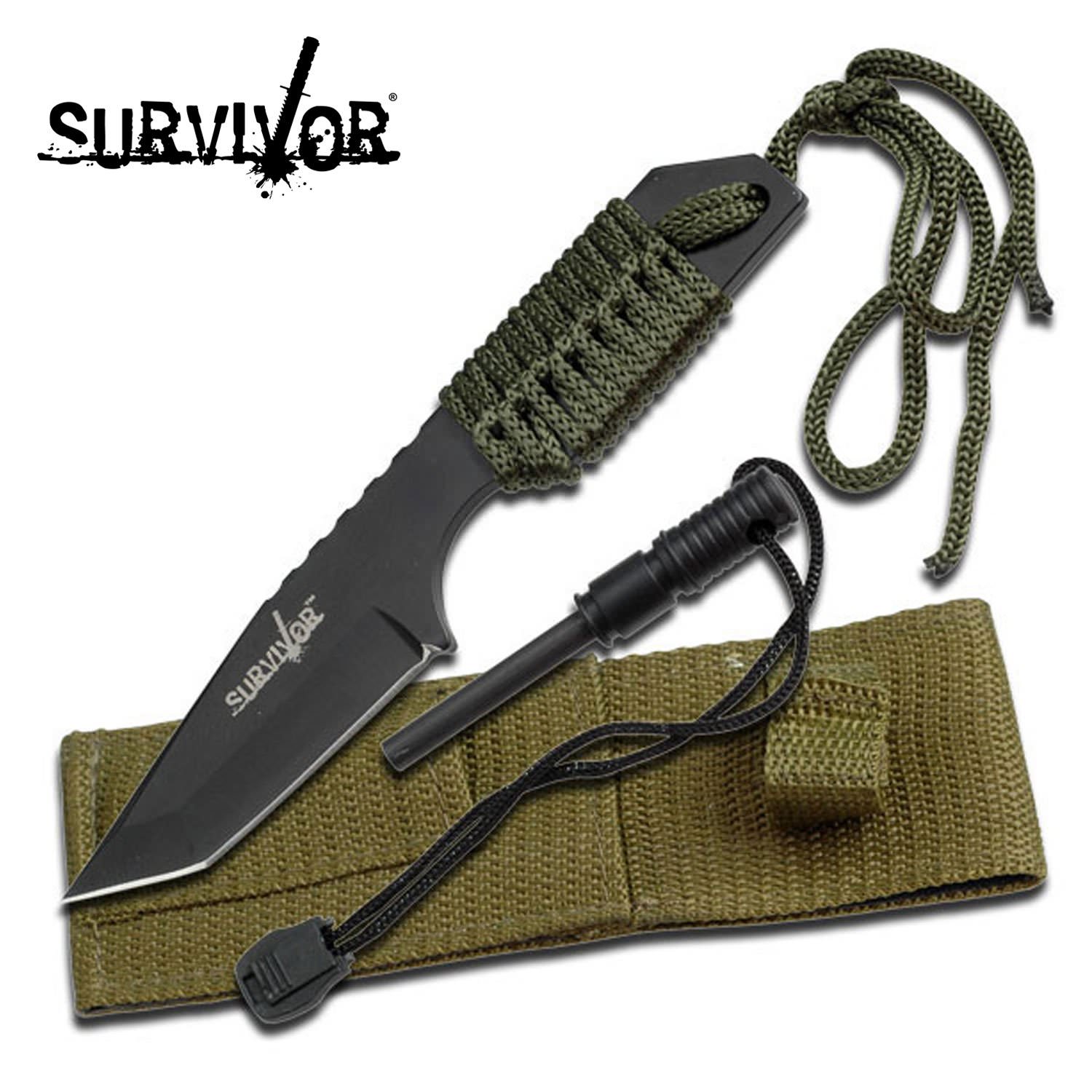 What’s the essence of having such a game changing knife if you won’t be able to take it around town with you?
Quick recap of the features of this knife, this knife is 11 inches long, has a blade length of 6 inches, and is made of stainless steel, and is perfect for heavy duty use and this knife is a force to be reckoned but within and outside jungles.
This knife is the epitome of what a survival knife should look, feel and function like.

We all know how intimidating the color black is, that’s why more and more knife producers are opting to produce a larger volume of black knife or at the very least black blades.
Very few knives have double reverse serrations. The handle of this knife features a black finish metal handle. This knife also features a guard, and a very useful screw off compass.
The overall length of this blade is 11.25 inches as the subheading indicates, of that 11.25 inches, 5.75 of that is all blade. We are yet to get to the best part of this description; this knife is just a single piece of this survival kit. 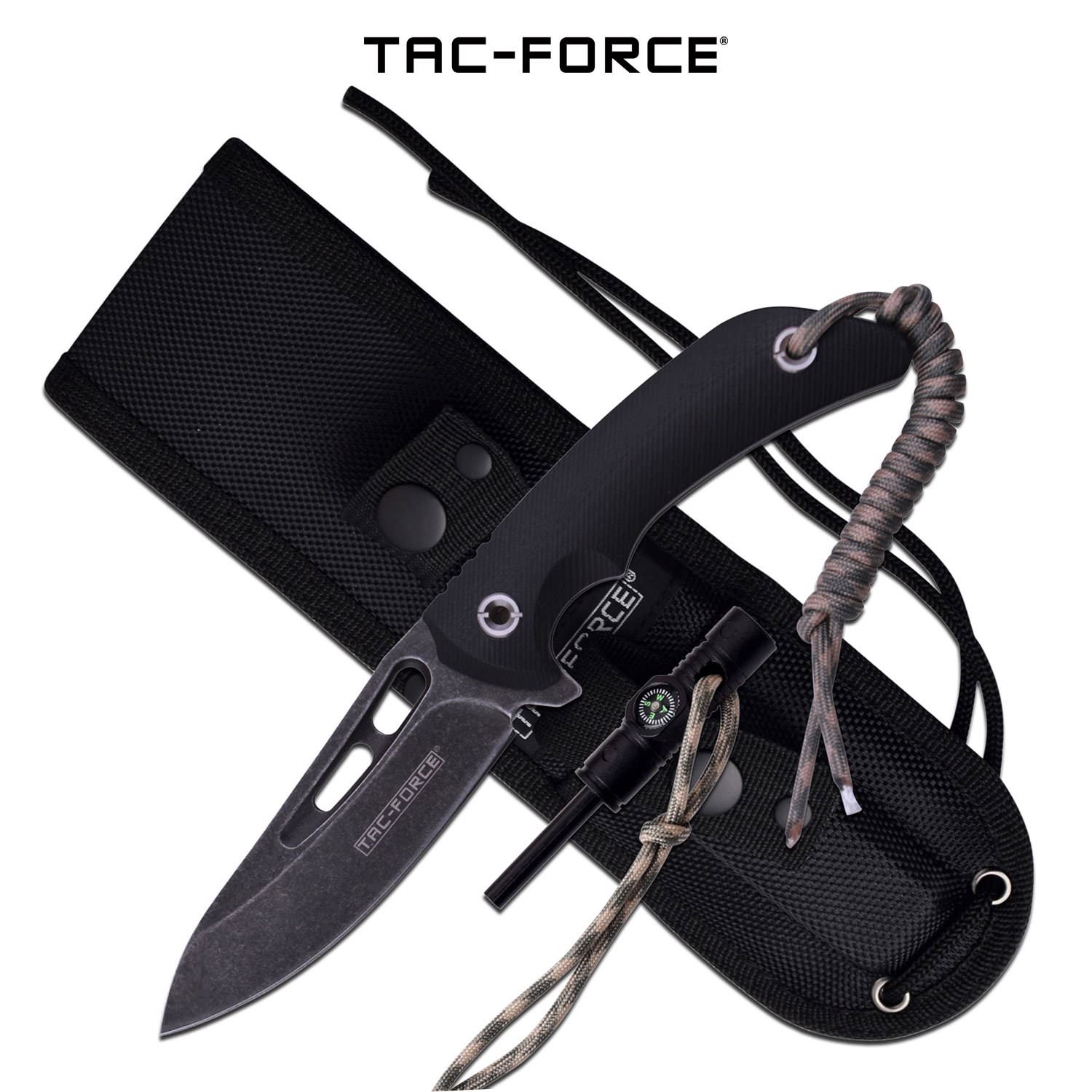 The black kit has the knife has its star attraction, that doesn’t mean that this knife lacks the supporting cast to be a beast. An average kit includes a combination of the following, fish line, hooks, sinkers, small blade, pencil, matches, needle, a thread, clipper and even a pin.
This survival knife and kit is indeed a force to be reckoned with.

Anyone who has ever embarked on an expedition such as a camping trip, survival test, mountain climbing knows just how hard it is to survive in the wild.
In the wild, you have little to no protection; it doesn’t matter if you’re in the middle of the salt flats of Utah, or in the frigid wasteland of Siberia, heck even in the swampy wastelands of southern Florida, the wild is always unforgiving.
That’s why you need this double edged dagger by your side at all times.
This survival knife has an overall length of 11.50 inches, of those 11.50 inches, 6.50 of that is allocated to the blade. 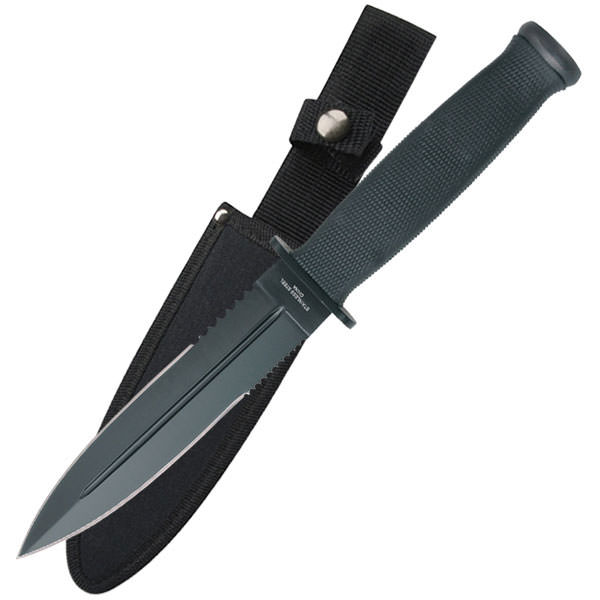 This 440 grade stainless steel blade has been coated with the color black, not only are these blades efficient, the also feature dual serrations on their teeth. You thought the blade was cool, wait till you meet the handle; this handle is made of black rubber.
This black rubber is easy to grip and doesn’t falter when called to action.
Now that you have such a lovely survival knife, all that’s left is for a way to efficiently and stealthy carry it around, don’t worry, we have you covered because this blade comes with a black nylon belt sheath.

There are knives are there are weapons, this right here is a weapon that all other weapons emulate. Just take a look at it, it looks like a beast, feels like a beast and is probably a beast.
This military styled knife is the ultimate survival knife for the modern day adventurer. Even better, we mere civilian mortals fially have access to this state of the art piece of art.
Say what you want, but you should never under any condition doubt this military combat blade. 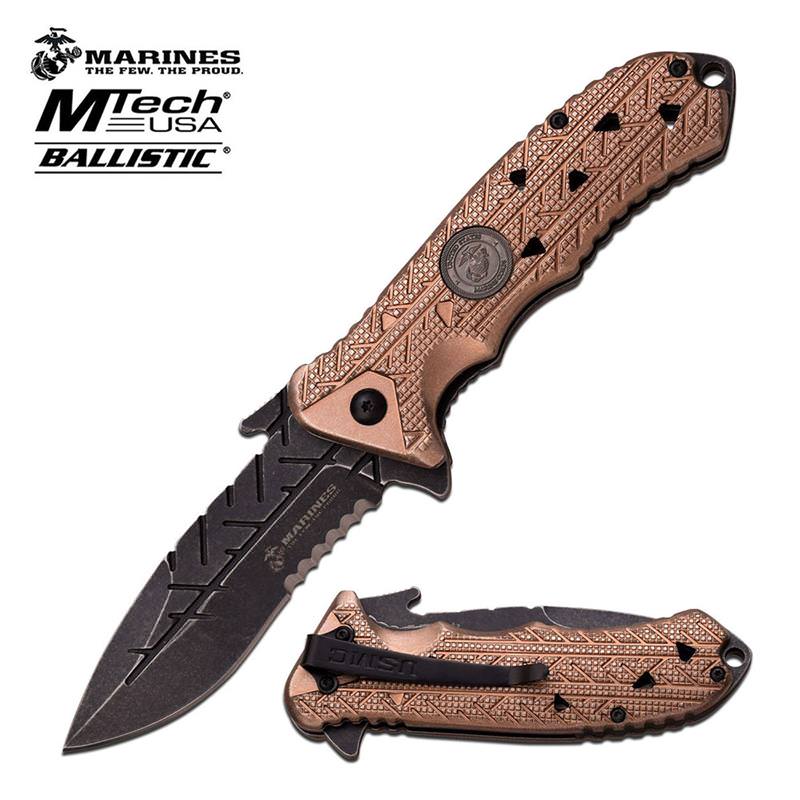 This knife is a fixed blade knife, this fixed blade knife has an overall length of 12 inches, of the 12 inches, 7.25 is the blade length, this blades is 3.2mm thick. That’s what you get with this knife, a black stainless steel blade with saw back.
This knife not only has a great blade, it also has a 4.75 inches ABS handle, this ABS handle is painted with Camo green.
You thought that was all? Well you’re wrong this time. The handle of this knife features a, wait for it; it features a metal pommel with compass. Last but not least, you can expect to get a 600D nylon sheath and survival kits when you own one of these

Do you consider yourself to be a survivalist? Do you consider yourself to be a dare devil to some extent? If your answer is yes to both then this survival knife is the one for you.
This camo knife has a build that’s smaller than most. It looks concise and suspiciously scary for its skinny width. This knife looks like it just stepped off the set of a high budget Hollywood war movie.
This tactical fixed blade knife is an outstanding 15 inches in overall length, 10 inches of this is for just the blade. This blade is a camo coated, 4 mm thick camo blade, this blade is a .33 serration blade, enough about this awesome blade let’s talk about the handle on this dragon. 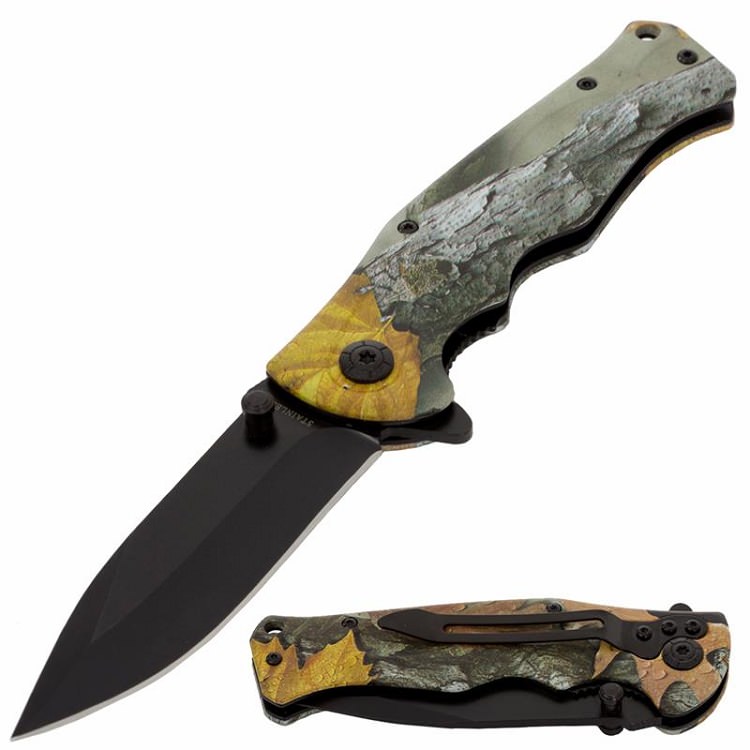 The handle of this blade is an outdoor camo rubber handle; the handle also features a knuckle metal handle.
This knife belongs outdoors, you shouldn’t own this blade if you know that you won’t make use of it as frequently as possible, this dragon does not deserve to be tamed.

You are yet to know what a real knife feels like until you make use of this fixed blade survival knife. This isn’t just a knife it’s a full package.
Off the top of my head, I know that this knife comes with a fire starter and a full equipped nylon sheath. This survival knife is just a piece of a very large survival kit puzzle.
Tagging this knife as mysterious is an understatement to say the least; it instantly increases your street credibility ten folds the moment you make use of it. 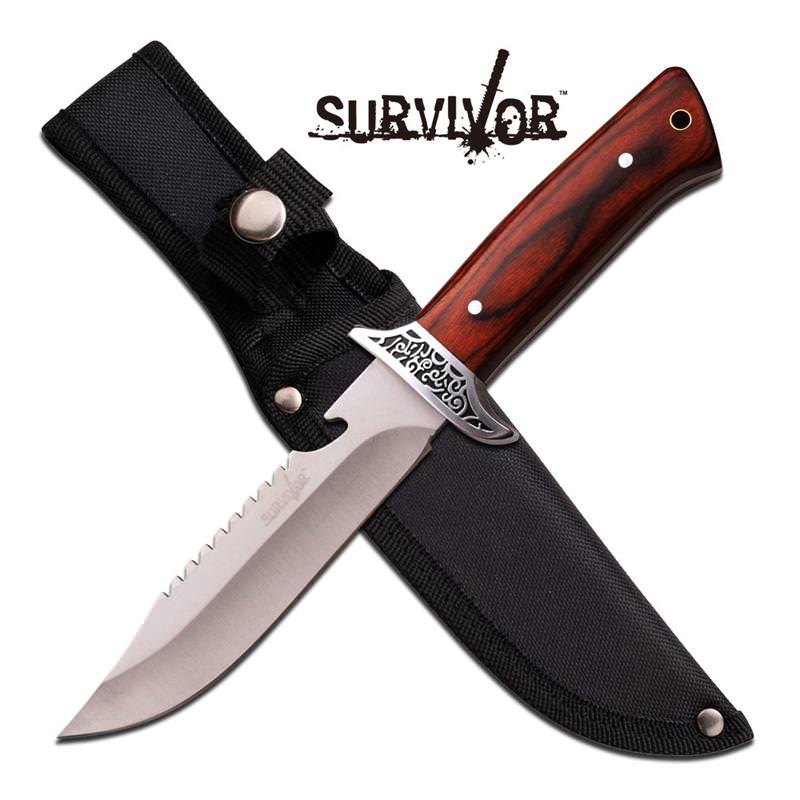 This knife has an overall length of 7 inches; this knife has been known to raise eyebrows here and there. This knife features a 3.5 inches fixed tanto blade, this tanto blade is black in color and is 3mm thick.
The handle of this knife is an interesting one, it is a handle wrapped in 3 inches of black cord.
If you ever find yourself in the wilderness, this knife can be used for setting traps, cutting down branches, building forts. After all is said and done, you need to understand the fact that you cannot go wrong with one of these.

This knife is a direct descendant of the early survival knives, this knife features a blade that is relatively thin although the handles aren’t made of wood, the come close enough.
This knife is well serrated and features an interesting addition in the form of a hook at the tip of the blade. This knife has a long and lengthy history, this knife is similar to those issued to aircraft crew members during the Second World War, and they knew how important these were behind enemy lines. 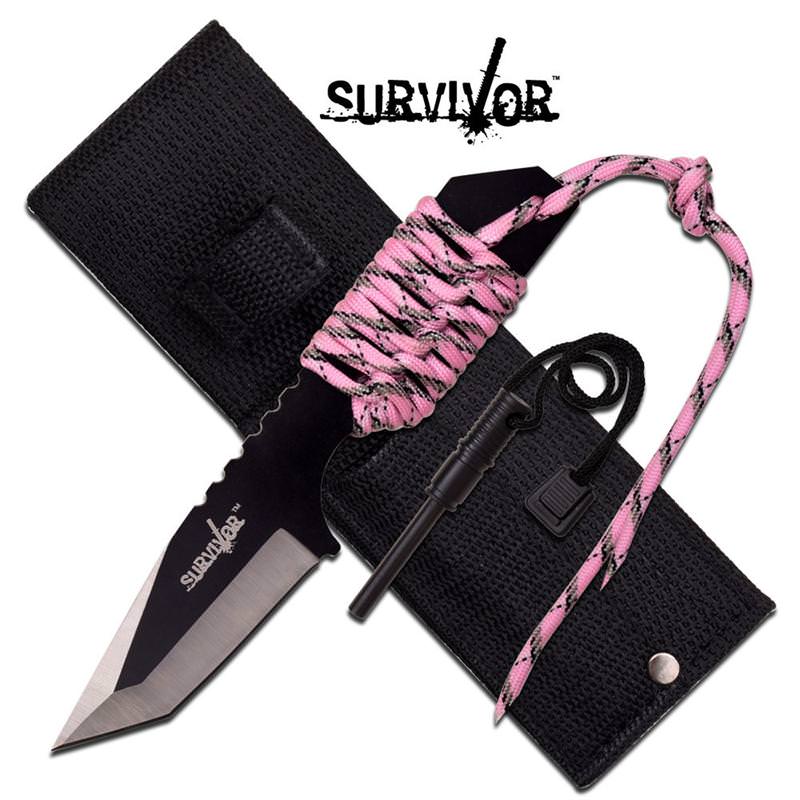 This knife has an overall length of 9 inches, the blade length is a little on the shorter side at 3.5 inches, the blade features what is known as a gut hook on its tip, like that wasn’t enough this knife is made of 440 grade steel.
The knife has a full tang design that makes it ideal for hunting and foraging. The handle on this baby is in a league of its own, it’s a full camo nylon fiber handle that not only looks evil but does evil things.
This survival knife is not only useful in the wilderness; it is also integral to surviving in today’s urban jungles. 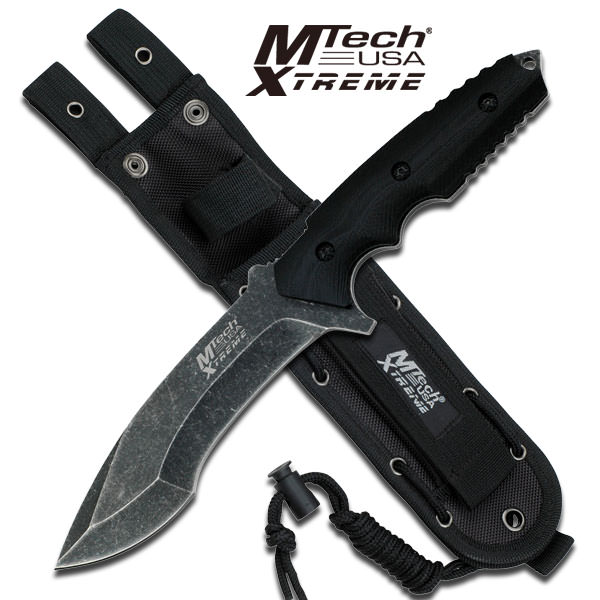 The dimensions of this knife include, it’s 4.45 inches overall length, of that 4.45 inches, 1.35 of it is allocated to its double edged fixed blade. This blade is 2.8 mm thick and it is painted black.
What we love most about this neck knife is the fact that it is very versatile; it has multiple functions and uses, it can serve as a bottle opener, it features a clip and a kydex sheath. You can’t make this stuff up.

This knife is more of an honorable mention. The biggest asset this knife has is the fact that it looks innocent enough, no one would suspect that this belt has a knife attached to its tip.
The belt buckle serves as the handle of the knife, this design is necessary as it aids quick deployment of the blade. While designing the knife, attention was paid to detail, when the blade is not being used, it automatically locks into place to prevent accidental deployment. 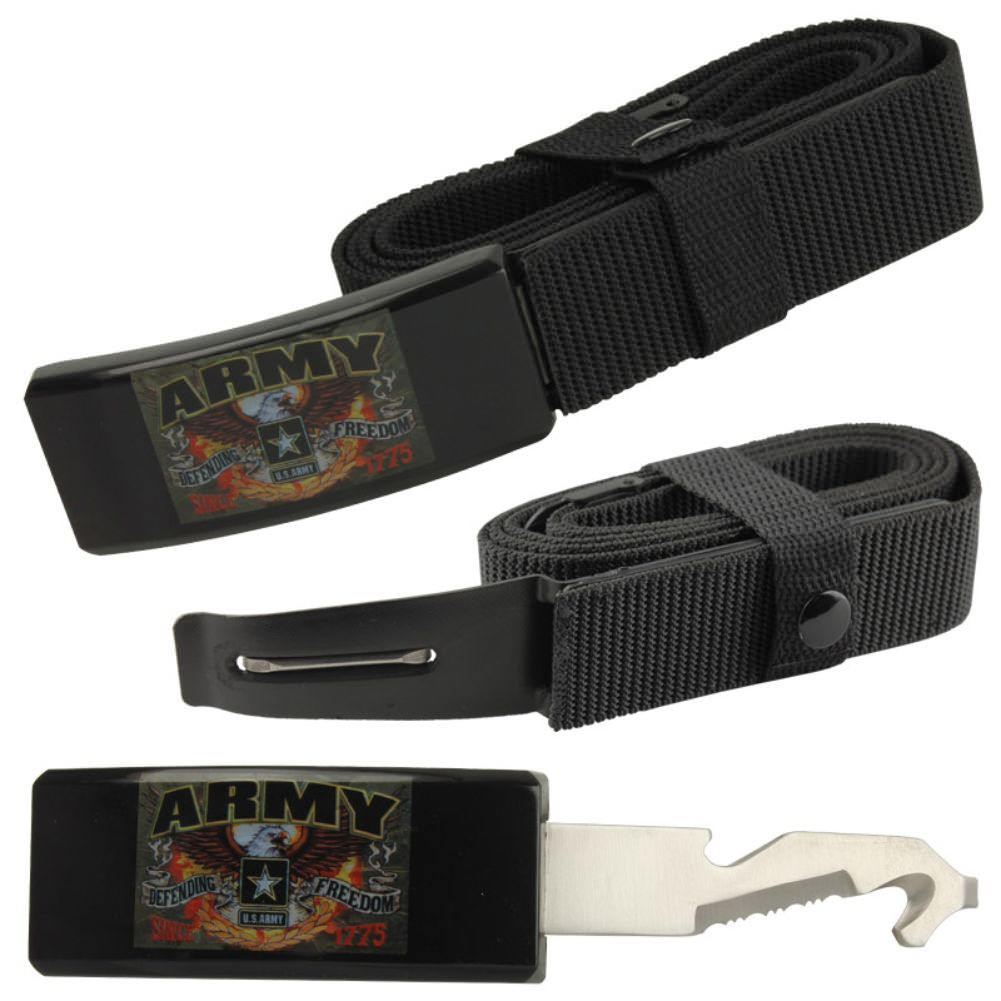 The blade on this knife is made using the regular suspect, 440 grade stainless steel, the belt itself is made using military grade nylon, this belt is also a fashion statement, most people might not know that you’re secretly wielding a knife but what they will know is the fact that you are wearing a very fashionable belt and that is a win on its own.
SHARE THIS POST
Previous Post
Next Post 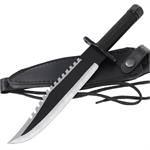 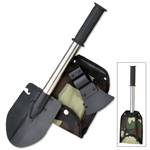 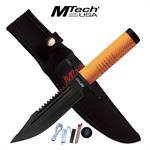 Mtech USA Fixed Blade Stealth Survival Knife Tennis Racket Handle Orange
An eyecatching knife that everyone wants. Overall length is 10.75 inch. Blade length is 6 inch and it is made from stainless steel. Nylon fiber handle.
$6.59
0
Out of Stock 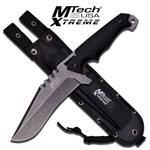 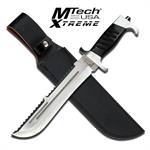 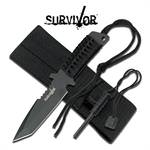 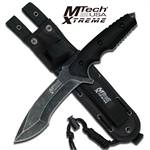