What is the Best Steel for a Karambit Knife and What are its Uses?

A good self-defense knife is enough to keep you safe and well-equipped in the face of any danger that you might face from another fellow being or an animal as well in certain cases. This was a lesson which my father continuously used to teach me since I was a kid and by the time I reached 11, I had learned this lesson quite well and I had even chosen my self-defense knife which was a nice and sharp karambit knife.
Being the daughter of a knife enthusiast, I had always known much more about knives that any kid of my age.
I grew up among my father’s mysterious and interesting collections who had almost every type of knife in his collection. He had spring assisted folding pocket knives, automatic knives, various fixed blade knives i.e. bowie knives, survival knives, brass knuckle knives, almost all types of hunting knives as well.
He was an outdoor enthusiast and always used to take me on his outdoor excursions which used to be quite adventurous, no doubt. So that is how I got to know about lots of outdoor weapons and stuff and that included the amazing karambit knives which I love the most out of all knives. My interest in them increased after an incident which would have turned into a disaster if not for my father and his remarkable skill with his knives and in this case, a karambit knife.
I was 10, and my father and I were once again on an outdoor trip. We had just set our camp on the woods and taken out disposable plates and glasses to eat what was left of our hunt which we had done on our way, that we heard some rustling sound and some footsteps in the woods. My father asked me to go inside the camp immediately which I did but I was peeking from the opening as well.
I still remember how scared I was especially when I saw a strange man standing in front of my dad. He was partially dressed and mostly naked. He looked as if he had not taken a bath since so many days and his hair and body was all filthy and filled with dirt.
His hair was long and came up to his shoulder and he was looking at my dad as if he was a prize or as if he wanted to devour him in one go. His look gave me the chills, he was a made wildling. My dad tried to talk to him politely by keeping his distance but he suddenly lunged at him. I screamed and ran out of camp.
My father was pinned beneath the man and asked me to throw him his karambit knife. I was frozen to the spot and couldn’t move but my father was shouting and I ran towards his backpack and took out the knife. By that time, that man was strangling my father quite hard and my father was choking for breath. I passed the knife to him which he grabbed and made a slash on the cheek of that person. He howled in pain and backed off. Both of them stood up and indulged in knife fighting as it turned out that pain had a knife as well tucked inside his torn trousers.
My father was quite skilled and knew his way around his karambit knife and soon that man was on the ground and we had tied him against a tree. We told him that we will not harm if he would just stop fighting and tell us what did he want from us. It turned out that the man attacked us for food and warm clothes, which we gave him and left. So, that day I learned the importance of self-defense properly and I was thankful that I had my father with me.
I asked my dad to get me a knife and when he asked me that which one did I want, I immediately took the name of a karambit. I wanted to learn a use of karambit knife like my dad did and I asked him to teach those tricks and techniques to me as well.
He let me choose my knife and I still have it with me, even though it is of no use now as its all rusty and slightly broken. But it was my first knife and I share the same love for knives as my dad so I still have it my knife’s collection. It is a strong, durable and sleek karambit knife which is quite stylishly designed and came in a beautiful combination of bright orange and black. Its blade was razor sharp when it came and my father asked me to be super-cautious with it.
It also had an ergonomic grip which facilitated in the easy and convenient grip of the knife. Moreover, it came with a pocket clip and sheath as well which made it quite easy for me to carry the knife around safely. I kept it with me for self-defense and for utility purposes as well.
Thank god that I never had to use it for the former purpose and only used it for the latter purpose. Let me now give you a brief introduction of a Karambit knife.

Also Read : What are the Top 5 Survival Knives of All Time

What is a Karambit Knife?

A karambit knife is an exotic blade of Indonesia and is distinguished around the globe for its c-shaped blade. It is a curved blade which resembles the claw of a tiger and this is the main feature of this knife.
It also has a finger ring on its rear end which is used to perform karambit knife tricks and also carry the knife easily around the finger. One other use of this finger ring is that you can wear the knife which results in increased force when stabbing someone with it. So, it is pretty useful.
The karambit knives are mostly short in length but their blades are super-sharp. Mostly, the karambit knives come in two different types. They are the following.

The fixed blade knives are those which have blades attached to the handle permanently and the blade cannot be moved. This type of knives usually come with sheaths for safe and easy carry as they are not foldable. 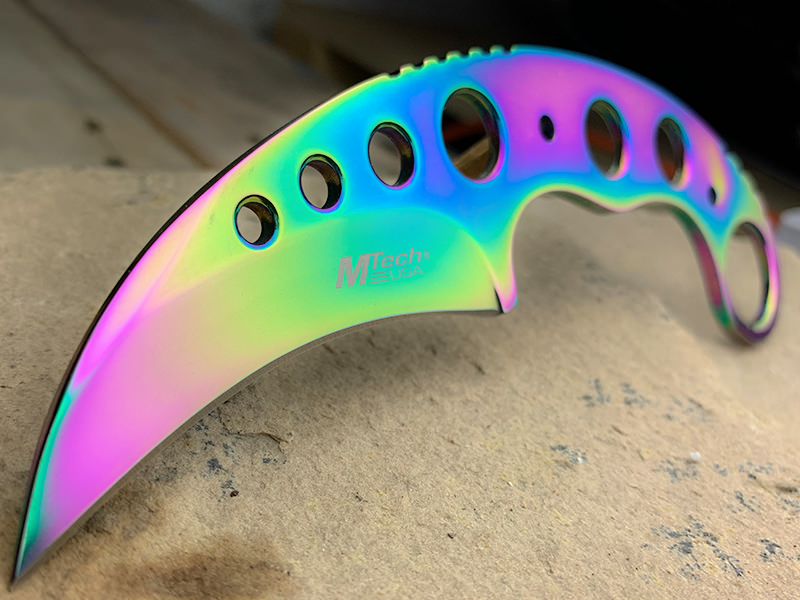 The second type is the folding pocket knives and these knives have blades which are movable and thus they tuck themselves inside the handle of the knife when closed. Mostly, they feature a spring mechanism or automatic one for opening and closing of the knife.

Carbon steel is also used to manufacture the blades of karambit knives. The specialty of this steel is that it does not lose its edge easily and remains sharp for a long time. However, you have to take special care of these knives and work hard on their maintenance as they corrode and rust easily leaving your blade useless after some time. So, keep them away from liquids as much as possible.

Which One is the Best?

The best steel used for manufacturing the blade of a karambit knife is stainless steel and most of the karambit knives available in stores feature the same steel. Stainless steel has the property of corrosion resistance in it and prevents the blades of knives from rusting or getting corroded too easily. This makes them one of the best metals to be used to construct the blades of knives.
So, now that you have a clear and good idea about the karambit knives. When are you going to get yourself one?
SHARE THIS POST
Previous Post
Next Post 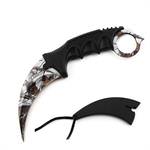 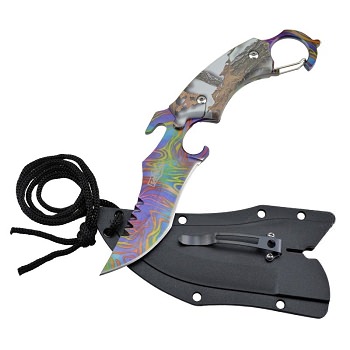