What Do Brass Knuckles Mean and Where Do They Come From?

What are equally a weapon and a fashion statement? You guessed it right, Brass knuckles! They are pieces of metal constructed to fit around the fingers by the lower knuckles and gripped by the hand.
These knuckles can produce a powerful, potentially deadly punch. They are generally fist-worn weapons that are used in hand-to-hand fights.
If you are searching for ideal street weapons, you must go for it. These knuckles are considered at the top of the deadly weapons. Now, you don’t have to worry about carrying any other weapon along with you when you can easily wear it around your fist and can be your defender.
It provides you easy and fast access to an efficient weapon by simply wearing them around your knuckles. It helps you in any dangerous situation were saving your life only matters. This incredible weapon allows you to deliver such a dramatic punch that is only seen in movies and dramas.
The knuckles increase the force of the user's punch by directing all the force into those sharp metallic brass knuckles. So, they can inflict numerous types of injuries that include bleeding, swelling, concussions, broken bones, and cuts as well.

What Are Brass Knuckles Made of?

Generally, brass knuckles are pieces of metal, usually made up of steel despite their name, shaped to fit around the knuckles. Most remarkably made from hard brass, as their name suggests. This hand-held weapon can also be made from steel, iron, lead, wood, and even plastic.
They are designed so that one can deliver a powerful punch through a smaller and harder contact part. As a result, they create greater tissue disruption and an increased likelihood of fracturing the victim's bones on contact.

An early structure of these knuckles was the ancient Roman caestus. Gladiators used to fight by wrapping their knuckles in leather or metal studs, iron plates, and even spikes. Japanese martial artists have used this knuckle-like weapon called the Gekko, which was made up of wood or metal.
The knuckles were in use by armies by at least the 18th century. They were circulated by the US military for soldiers during the Civil War; Abraham Lincoln’s bodyguard even had one. During World War I and II, warriors used variants fixed with knives for some extra force in hand-to-hand battles. Some have even made knuckle versions along with guns.
These uses of brass knuckles have long been linked with gangsters, pimps, and criminals. There’s even been a crime film made in the 1920s called Brass Knuckles. And in 2008, a famous movie star, Angelina Jolie sported them in the action thriller movie Wanted. 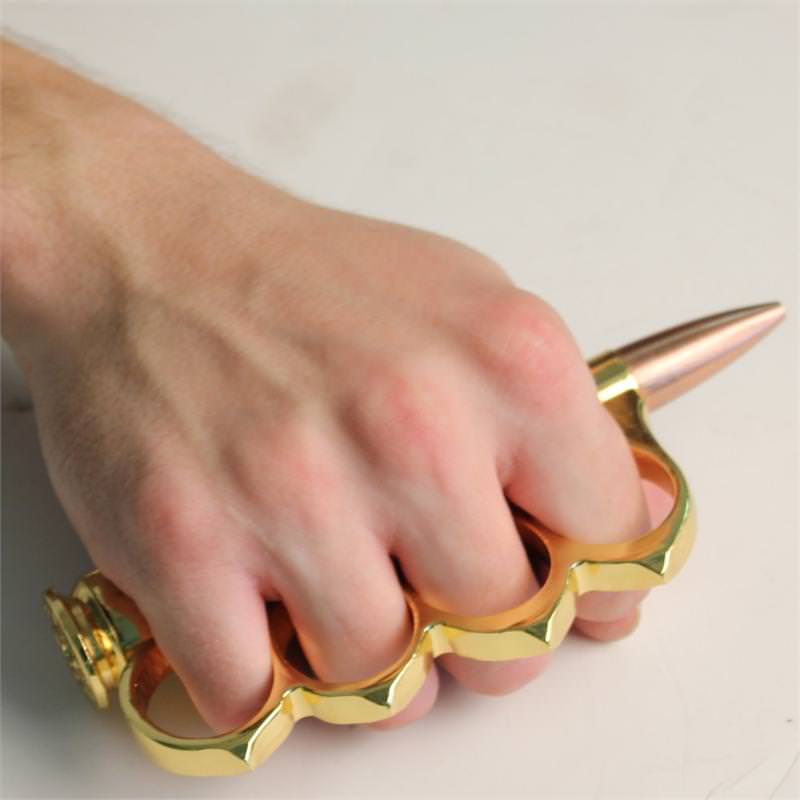 Thanks to their doomed past, these knuckles have developed a “badass” image, making them as a fashion statement everywhere from the hip-hop to the hardcore scene. Some are decorated with jewels or ornamental skulls, worn on necklaces, belt buckles, and shoes or adorned on cars.
Knuckle dusters have also been making their way to feminine trends, which takes on these knuckles stylized into large rings. Many books have used these knuckles in their titles to signify roughness, as have many brands.

Despite their name, generally, metals other than brass, plastic, and fibers are also used for its making. A common brass knuckle is manufactured from one solid piece of metal, either brass, aluminum or any other alloy.
One end of the metal piece creates a curve to fit squarely into the palm when closed. The other forms four open loops to fit loosely around the fingers of the user. The fingers placed through the loops and the curved end settled into the palm so a tighter fist and stronger punch can be delivered.
When you wear the best self defense weapons for women on the hand, fingers can’t be driven into the palm as metal grip grasps them in position. This feature is an absolute advantage in contrast to an unarmed rival.
The design is made so to preserve and focus the force of a punch by directing it towards a smaller but harder area. This contact causes an increased disruption in tissues with many chances of fractured bone on the attack.

These knuckles come in different types such as belt buckles and brass knuckles paperweights that look stylish. Knuckle paperweights are so trendy that they will instantly elevate the status of your space and will give it an elegant touch.
Belt buckles will give you a very trendy look and will make you the fashion plate in your surroundings. Along with being stylish, you will have a self-defense weapon in your arm’s reach always to help you out in an emergency.
You can easily find the best knuckles at affordable prices. You can also find knuckle knives which were used during World War 1.

Are real brass knuckles trendy or deadly? This is an important question that almost every knuckle fanatic has in their mind.
Well, it is believed that the people involved in one-on-one fights, from bodyguards to warriors in the trenches, appreciated them and used them frequently. No doubt, they provide ultimate protection to your knuckles from the pain of punching someone's face.
The use of metal assures that they can cut and tear the skin for sure. As well, the additional weight will increase more energy by causing more pain.

As brass knuckles are effective at punching someone and causing pain. These smaller and more tactful knuckles are a better option and can be carried a little easier. It is, no doubt, very easy to carry, and preferably hard to identify as a weapon.
So, what are you thinking about now? Don’t wait anymore and grab your knucks today! Don’t forget to check out the coolest knuckle dusters for sale under $10!
SHARE THIS POST
Previous Post
Next Post