What Are the Various Uses of the Karambit Knife?

This article deals with the burning question which many of the newbie knife enthusiasts have with respect to the use of karambit knife. When it comes to selecting a knife which possesses a unique and badass design along with being a utility as well as a combat blade, then the karambit knife is among the few awesome blades to pop up in one's mind.

Apart from the unique blade, the design of the knife resembles that of a tiger's claw. For this very reason, it has been dubbed as the "tiger's claw"; in addition, it also carries the ferocity as well as the brutal grip resembling the tiger's claw for real.

Before we proceed to the main point of this post with respect to the utility of this blade, let's go through the history of this amazing knife.

Today we can see that there is a variety of the karambit knife available on the net and local markets; however, before the manufacturing of the modern version of this blade, this "tiger's claw" was primarily used as a farming tool in the ancient Philippines which is a fertile country located somewhere in the southeastern region of the Asian continent.

Many historians hold the opinion that this blade at first came to the surface somewhat around the 11th century; however, soon this blade gained much popularity due to the trade season at that time.

This knife became well-known in the Asian countries with respect to its utility and unique blade. Most interestingly, this blade was also secretly carried by the women while wearing it within their hair; thus, the karambit knife could be effectively used as a self defense weapon by the women as well as the farmers in case a life-threatening situation occurred and demanded it from them.

What is the Use of the Karambit Knife?

Let's come to the real topic of discussion; the usage of this amazing blade. We learned from the historical overview of this blade that it was primarily used as a utility as well as a farming tool in the ancient Philippines. In other words, people tend to use this blade in the form of an EDC knife.

In addition, apart from the rest of the world, the karambit knife is still in popular use in the Philippines in the form of an EDC pocket knife.

It is true that the primary version of this knife did not possess the safety ring; certain developments including the addition of the safety ring were made later on as the knife manufacturers took to slightly altering the design, material, and framework of the blade in order to meet the needs of people. There is another term for the safety ring as well; we are referring to the retention ring.

With respect to the modern version of the karambit blade, the safety ring is a mandatory part of the design; in fact, some versions of this "tiger: blade also include more than one safety ring. It wouldn't be wrong to state that the presence of the safety ring has contributed much to its popularity in terms of being the perfect option for a combat knife or a survival knife.

Naturally, the primary instinct of the potential attacker would be to snatch away the blade or to rip it off from your hand. However, the presence of the safety ring will never let this happen. In fact, with the right kind of maneuvering moves and slashes, you can bring down the strongest man on this planet.

You will just need to know how to maneuver the blade which is no rocket science either. The unique design of the blade will allow you to perform a variety of tricks, such as the "hook and slash"; the potential attacker will definitely get disoriented while he will keep receiving the blade slashes.

The Application of the Knife with Respect to Self Defense

When it comes to self defense; the majority of the people keep thinking about guns and other lethal weapons. However, the essential truth is that there are loads of things which can go wrong with the guns; not to mention the fact that there are many legal issues involved as well. In this regard, it is important to play safer.

The karambit knife makes one of the best self defense knives; in fact, the mere design of this blade suffices the potential attacker to acknowledge the fact that he is about to make the greatest mistake of his life by even thinking about attacking you in the first place.

The curve of the blade of this badass knife allows you to defend yourself without letting go of the fluidity of your maneuvering emotion. Moreover, the unique design and curve of this blade allows the wielder to change motion with ease and as smoothly as possible.

With regards to self defense, the karambit knife allows the wielder of this blade to engage in the most famous and most effective knife maneuvering trick: getting the attacker's limb hooked; subsequently, trapping it; going for the hook; and lastly, ripping the flesh which will definitely cause enough damage to your attacker's anatomy. They will be running for their lives soon and leave you alone for a lifetime.

In other words, this unique blade allows you to aim for simultaneous attacks while staying in the same attacking spot. The coolest part is that once you hook onto your attacker's anatomy, you will be directing his movement and gain an instant upper edge in the fight.

The safety ring of the blade allows you to have the blade "attached" and "wrapped" with your body; therefore, it allows you to go full ballistic while being very accurate at your slashing aims.

Unlikely to the other blades from the category of the self defense knives, the karambit knife exerts no pressure on your wrist; therefore, you won't have to fear about getting accidentally injured or wounded by your own exertion.

A single look at the karambit knife will suffice in convincing anyone about its dark yet sturdy appeal; in other words, if you are looking for a reliable, durable, and essentially strong combat knife, then it is highly recommended to get one of these tiger blades.

If you are a newbie to the game of survival and survival blades, then it is recommended to get sufficient training with respect to the maneuverability of the blade.

The professional wielders of the karambit knife are typically capable of continuously maneuvering the knife in an impressive way with their subsequent hook, trap, and slash tricks. You can also find numerous tutorials online with regards to the maneuverability of this blade.

In addition, there are many knife gurus online who offer the best tips with respect to the use of the karambit knife in connection to personal defense. Last but not least, always check the local laws about the legality of the knife before making the final purchase. 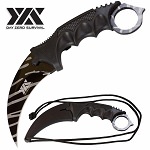 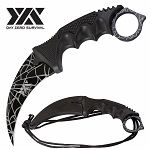 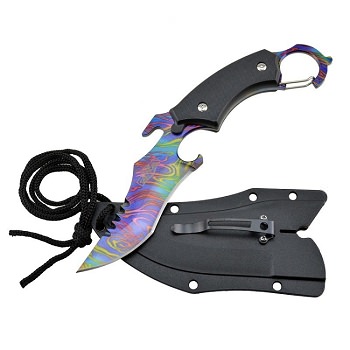 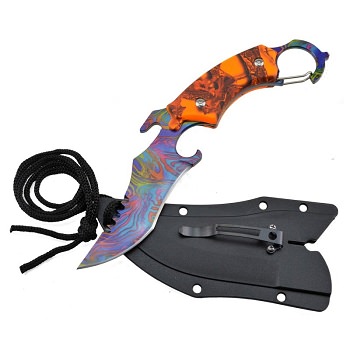 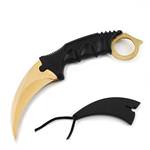 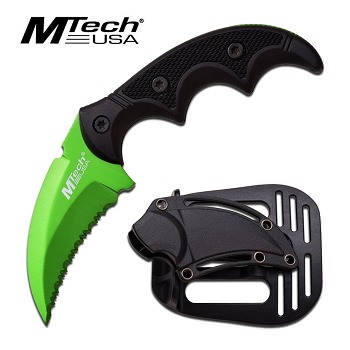 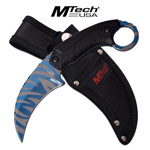 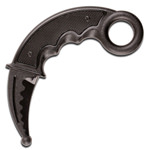 6.7 Inches PP Material Practice Training Karambit Knife
6.7 Inch Overall Practice Black Karambit knife with round tip. Made up of Polypropylene Material. This knife is made up of polypropylene.
$4.80
0
Out of Stock 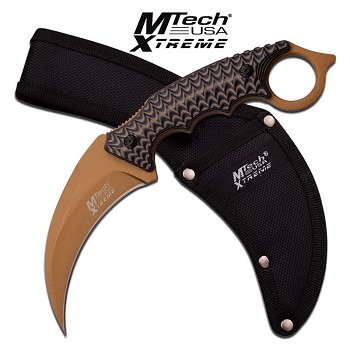 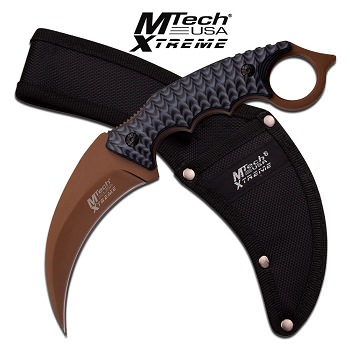