The 5 Most Breathtaking Real Swords that People Still Obsess After!

Swords are one of the truest, elegant and remarkable weapons of all times. If it weren’t for nuclear weapons technology, the sword would have still been the preferred choice of weapons. But as the concept of ground battles and marching your entire enemy on the enemy’s territory started to deplete, the need of weapons used for close quarter combat i.e. swords and daggers also started to deplete. Their place has been taken by the much efficient firearms i.e. guns, revolvers, shotguns, rifles and snipers. However, no matter how much advancement in technology comes, one fact will always remain the same i.e. no other weapon can ever match the glory and grace of the real swords. They were such masterpieces constructed after an extensive handmade process that would take several months to finish them. The most breathtaking real swords were constructed mostly during the Medieval era and their beauty is totally unmatchable.

Medieval Era is famous for a lot of things and among those things, swords are quite famous. Medieval Era was the era between the 5th and 15th century. The medieval era ended when the Renaissance period started in which the most renowned breakthroughs were made and advancements in technology and all fields of life took place. Medieval swords are known for their grace, finesse, and intricate designs. Many kings and emperors lived and died in the Medieval era. Every establishment has its own sword, sometimes even had their name engraved on it and differed from other swords in terms of design, construction materials, and efficiency as well. Let us have a look at some of the most famous swords for sale that are still widely available and which you can get for yourself and use this piece of history for decoration purposes.

All of us are familiar with the Excalibur. Aren’t we? It is one of the most famous blades of the Medieval era which belonged to King Arthur. Also, the magical story that spins around King Arthur and this beautiful sword, the Excalibur is enough to make people go crazy over it as it is said that King Arthur pulled the sword out of the stone and only the deserving person would have pulled out that sword. The Excalibur is not a long sword but is actually a short sword that takes the form of a long dagger. Its blade has a black finish and the handle is black in color that comes with a golden pommel and grip. To further make it more graceful, there are beautiful etchings and engravings on the pommel and grip of the sword which makes this sword very hard to resist.

The Scandinavian Norsemen Raiding sword is actually the sword of the Vikings and falls under the sword from the sword family “Spatha”. It is a beautiful sword and looks classy and simple in its black and silver combination. The blade is razor-sharp and is made up of high carbon steel. The silver finish on it gives off a sheen and throws off sparkles when brought under sunshine.

The handle of the Viking sword is made up of black color and comes with a sheath of pitch black color that goes well with the sword, protects it well and makes it easy to carry as well. A fuller that runs down the entire length of it further makes it beautiful. The hilt is also made up of metal and black leather is wrapped around giving it a classy look and providing a comfortable grip to the user as well. The Scandinavian real swords are quite simple and are available in stores nowadays at very affordable rates.

The Classic Medieval Broadsword is the sword of the knights which the knights of the Medieval era used to carry with them. It is called a broadsword because it has a broad and wide blade, well broader than the normal swords. The construction of this blade is pure stainless steel and it is quite sharp as well. The handle comes in black color which contrasts quite well with the golden color of the guard and pommel because they are made up of pure brass. The sword looks totally breathtaking and depicts the culture of Medieval times. The best and most unique feature of this sword is its pommel which is designed as a big round object. Different shapes and icons are designed on it giving it a unique and elegant look.

Who isn’t familiar with the beautiful sword of King Solomon? Right? Calling it beautiful is actually an understatement as it is a genuine masterpiece. The King Solomon swords which are available nowadays are the replicas of the King Solomon’s real sword and is designed just like it. The total length of this sword is forty-eight points five inches and that of its blade is thirty-eight inches. The blade is fully constructed of stainless steel and has a factory sharpened edge which can be made razor-sharp if wanted. It also features extensive laser etchings on it. This sword is well-crafted and designed as is depicted from its beautiful structure and intricate details. The guard of this sword has an antique finish which is given by making it gold plated. Moreover, various symbols have been etched on it i.e. the Art of the Covenant and Menorah, the Star of David and other historical symbols. These real swords can be bought at very affordable rates in stores worldwide and they also come with wooden plaques so that you can display these elegant swords on your walls easily.

This sword has been inspired by the movie “The Gladiator”. Have you seen it? If not, then do watch it, as it is a must watch especially for all history lovers. The Gladiator sword which is available in the market is the replica of the Gladiator sword featured in the Gladiator movie. The movie plots around the time of the Roman Gladiators who used to carry these intricate swords with them. These real swords are quite exceptionally designed and their fine blades being quite razor sharp were capable of cutting down anything that would come their way. Moreover, the blade is made up fully of stainless steel which is unsharpened in case of these replicas.

The ivory handle further adds to its beauty which when combined with the brown wooden construction of the guard and brass toned varnish gives it a mesmerizing look. The small roman figurines made up of brass are also etched on the guard and the gold of brass against the brown grain wood construction looks totally impressive. A scabbard of brown color and made up of hard leather also comes with this sword and features a belt as well so that the sword can be carried around easily or hanged on the wall as well. So, tell me, would you like to have this stunning sword for yourself? If yes, then be glad to know that these real swords are available in stores worldwide at very reasonable rates to help you be the Roman Gladiator of your dreams!

The Claymore sword is another famous sword of the Medieval era and is one of the most elegant real swords of all times. It is the sword of Sir William Wallace who was a popular Scottish figure of the 13th century. The Claymore stands tall at a height of about forty-two inches and attracts the onlookers towards its sheer beauty and simple design. The blade of this sword is also quite sharp and is made up of carbon steel. The guard has a chrome polish on it which gives it a glorious and breathtaking look. It is bought by lots of people nowadays to be displayed in their drawing rooms as an elegant piece of Scottish history.

The above-mentioned Medieval real swords for sale are available at very reasonable rates in stores all over the world. Many of them are such true and genuine replicas of the real swords that you will feel as if you have the original piece with you but they may be a bit expensive. However, some promising replicas are also available at very reasonable rates. 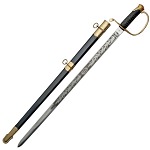 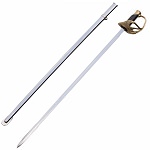 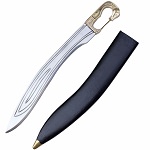 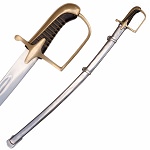 Polish Officer's Saber WZ.1921 Sword With Scabbard
Polish officer's saber wz.1921 Decorative model Presented sabre is an exact replica of Polish officers honour sabre wz. 1921. This was the most popular Polish sabre during the interwar period. Designed in order to Polish Military Minister in 1921.
$29.99
0
Out of Stock 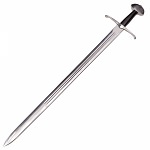 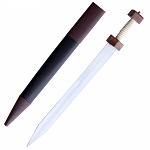 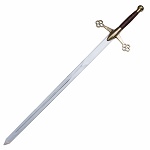 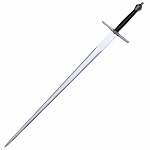 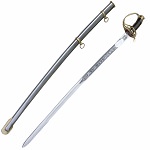 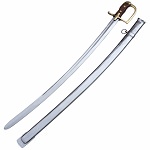 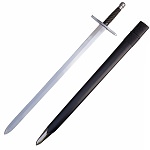 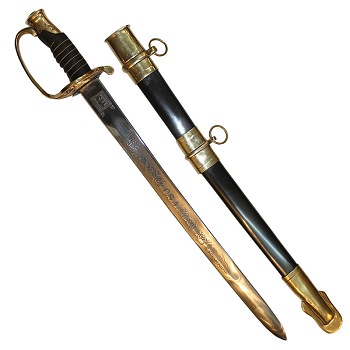