Most Expensive Samurai Swords and its Features

Posted by Wholesale Blades on 3/12/2019 to
Swords have been the primary weapons for the human race for a long time. Many swords were designed and invented; some of them so extraordinary that people still keep them for collection purposes and these swords themselves speak of their history, grace and their owners. In the list of these magnificent swords, the Samurai swords mark the top.
Samurai swords speak of their class and their fine and highly ranked owners. These swords have a huge fan base even now in the 21st century, so if you are a fan of the Samurais and want to know about the most expensive Samurai sword and its features, then stay with us as this is what this article is all about. However, let us have a brief introduction of the Samurais first.

Who were the Samurais?

The Samurais followed the Bushido code and were among the elite of feudal Japan. Don’t know what Bushido code is? It means that they served the elite class people of Japan known as the Bushi which the royalty is most likely. Samurais were soldiers and followed a strict code of conduct.
Their strict rules, good manners and a fine code of conduct was what set them apart from others. They were quite famous for their strength, valor, and courage on the battlefield.
Samurais were excellent military people and had excellent weapons as well. Their best and most prized possessions were the Samurai swords which they always kept with themselves. The most common and finest Samurai sword was known as the Katana. It is one of the most expensive nowadays as well.
There were other swords of the Samurais as well i.e. the Odachi, the Tachi, the Wakizashi and so many others as well. However, none of these matched the elegance and finesse of the Katana. So, let us have a look at the most expensive Samurai sword and its features.

A Brief Introduction to Katana Swords

The Katana sword is the most famous Japanese sword and is said to be the invention of the Samurais. Even when we talk just about Japanese swords, we immediately think about a Katana when history tells us that there are so many other Japanese swords as well.
The Katana was constructed for the first time between 1392-1573 and was an updated version of the previous Samurai swords so that it could be more effective and efficient than its predecessors. This is the most expensive Samurai sword and its features are very distinguishable.
Do you know what makes a Katana so different from other swords? This sword has a sleek and slender look and comes with a single-edged blade.
The blade is generally straight but has a slight curve in it as well. The blade is slim and long and that gives this sword a very classy look. Moreover, the original Katana was so strong that it was almost impossible to break. It took days of hard work to construct a Katana sword and it also has a sharp-edged blade that the enemy was so fearful of.
As we discussed above, that the Katana was a long sword and its length ranged between 60 cm to 80 cm.
Moreover, it is known to have a round guard so that one can hold it properly and securely. If you have ever seen a portrait or a picture of a Samurai warrior, then you must have seen that the Katana is held in the same way with two hands by him which he wields in front of his chest in a vertical manner.

There are so many Katana swords available in stores nowadays. Some are cheaper in cost than the others. However, there are some of them which are quite expensive. Of course, it is clear that the expensive ones will have better construction than the cheaper ones, will feature intricate details, and will be closer to the original Katana sword in design.
So, let us have a look at the different varieties of the most expensive Samurai sword and its features. 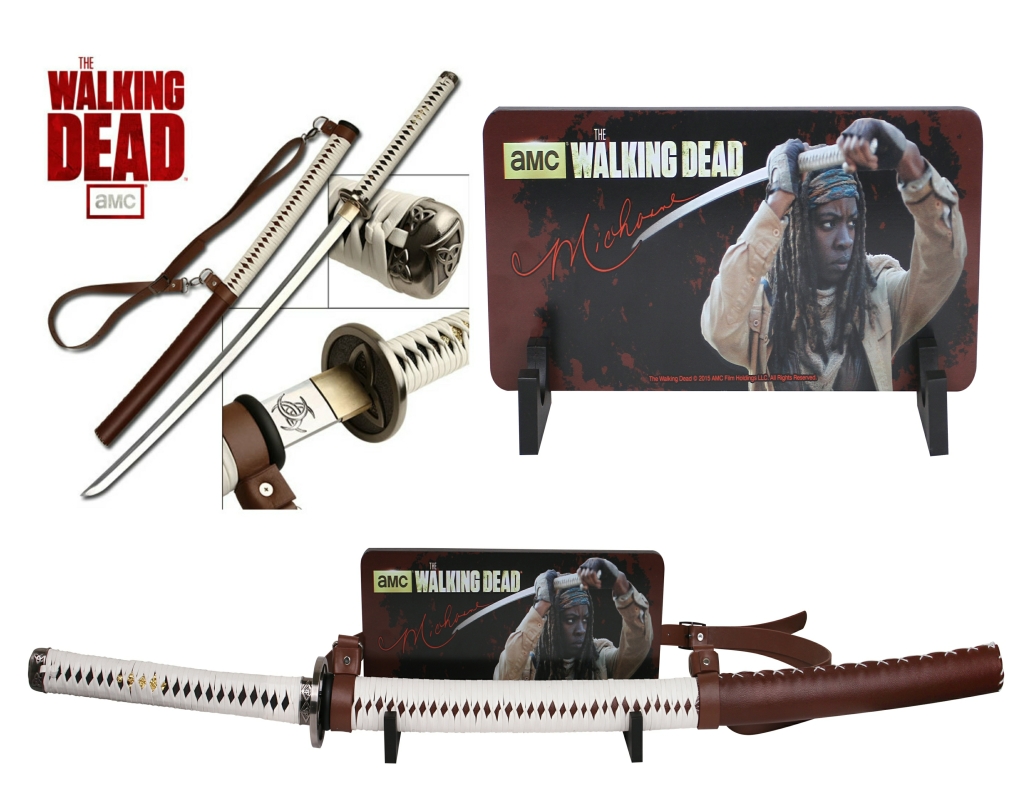 If you are a fan of the horror or fantasy series, then you must have watched The Walking Dead show for sure. This Walking Dead sword is the true replica of the Katana carried by Michonne in this famous series.
This one is one of the most expensive replicas of the original Walking Dead sword because it comes with an official license of Michonne’s Katana sword by AMC and features the exact same design and construction.
It also includes a certificate of authenticity which further increases its worth. Although, basically it is a Samurai sword, however, a few alterations have been made in its design to make it more appealing or should I say dreadful as it had to be featured in a horror show.
This sword is dreadful in a way that it has a strong construction which gives it a sturdy look and makes the opponent's shiver just at the sight of it. Being a Katana, it is slim and long but also comes with a very sharp blade.

The blade of this sword is made up of carbon steel which is 1045 tempered and has a length of about 27 inches. It is unsharpened because it is not a battle-ready sword and is only meant for collection or display purposes. It comes in a beautiful combination of brown and white and comes with a tuba made up of metal and features a Celtic style symbol as well.
The handle has white leather and black ray skin wrapped in the top of it and has a length of eleven point five inches. This Samurai sword also comes with a scabbard with real leather wrapped on it.
This version of the Walking Dead Michonne sword includes an official Michonne poster and a full-color custom wall plaque as well so you can display this magnificent sword in your living room. 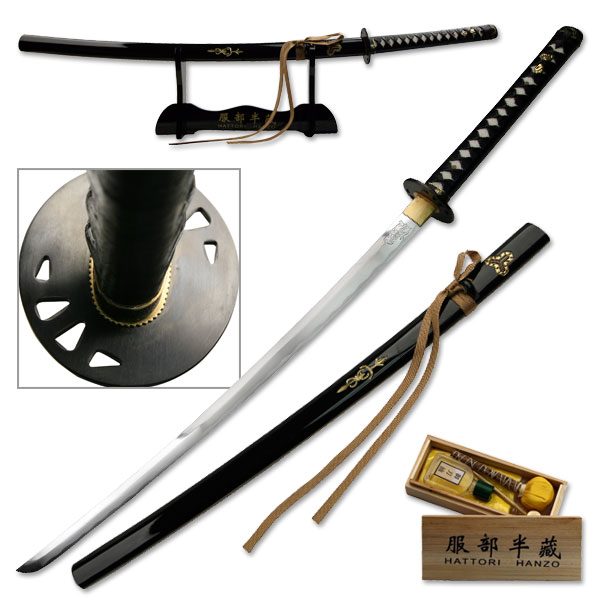 Are you ready to have a detailed overview of the best replica of The Bride’s Hattori Hanzo Sword from the famous movie Kill Bill? It is a full functional Katana sword and features a full tang blade which further increases its durability and strength.
The total length of this sword is 41 inches and features a blade of about twenty-eight point five inches.
The blade is razor-sharp and is made up of 1045 carbon steel. And you know what’s the best thing about the blade of this Samurai sword? It is hand-forged! Yes, you heard it right! The hand forged blade of this sword is made with finesse and boasts of strength.

The blade also has a simulated hamon line and a Hattori Hanzo symbol. The Tsuka of this sword is made up of cast metal and is wrapped with genuine ray skin which further adds to its beauty. The scabbard of this beautiful sword is made up of wood but has a glossy black finish and some Hanzo designs carved into it in gold color.
The scabbard also has a brown color ribbon tied on it which gives it a stylish look and goes well with the overall black and gold theme of the sword. Moreover, if this Samurai sword also comes with a display stand made up of hardwood and a cleaning kit along with a sword bag made up of black cotton to keep the sword safe. 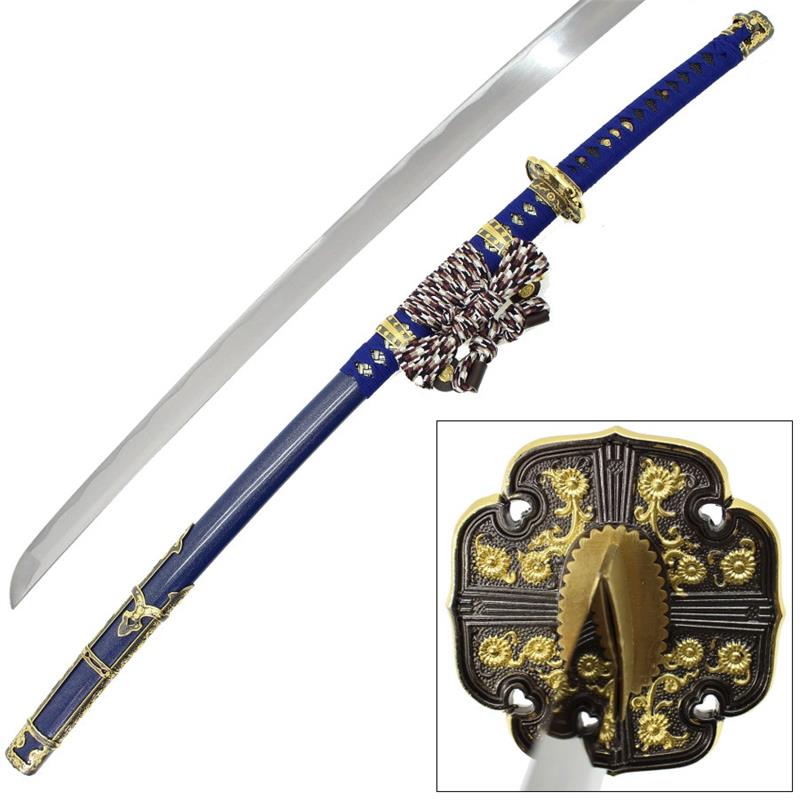 You must have seen swords in movies that are only being used for performing certain types of rituals in ceremonies and festivities. Well, the Ceremonial Samurai sword is one of those swords. It boasts of elegance and speaks for its high class and stature as it has been made only for royalties.
It is a fully-functional sword and the blade is made up of 1045 carbon steel which is hardened with an aesthetic hamon. The overall length of this sword is a good forty point seven five inches with scabbard, however, when we measure it without scabbard, the length comes out to be thirty-nine point five inches.
The fittings of this sword are made up of gunmetal grey and gold and are constructed of metal alloy. These fittings when combined with the deep blue color of the sword, look absolutely magnificent. The tachi is also wrapped with a synthetic fiber of blue color.
The handle is wrapped with same gawa rayskin of faux black color and also features fittings of metal alloy. This sword comes with a beautiful scabbard which is wrapped in gold and black colored cloth but has a synthetic fiber of blue color wrapped all over it. The last piece is the Saya that has metallic flakes and is painted blue to match the rest of the sword.
Features: 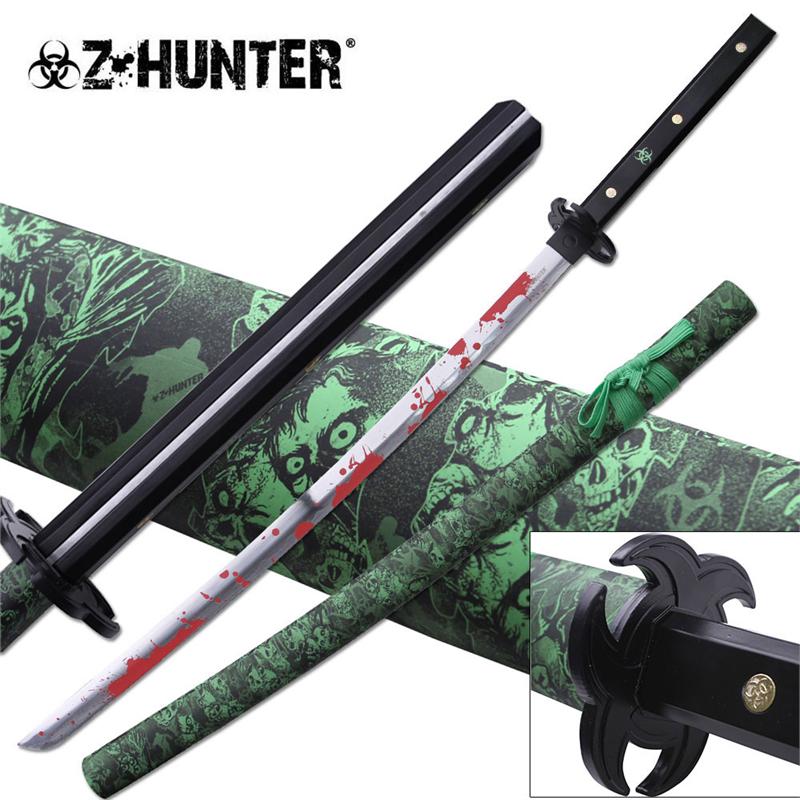 The Z Hunter Bloody Zombie Katana sword is the sword that should be feared and is an epitome of durability and strength. This sword features a full tang construction which further adds to its durability and strength. It has a total length of thirty-eight point five inches.
The blade is razor-sharp, is 4MM thick and is made up of stainless steel with a length of twenty-seven point five inches.
To give the sword a deadlier look, the blade is also splattered with blood. This Samurai sword has a handle made up of wood having a length of 11 inches with Biohazard logo pins on it. This sword also comes with a scabbard of green color having a zombie camo design on it. Overall, this sword is simple yet superbly constructed to be the companion of the perfect Zombie man.
Features:

The above-mentioned Samurai swords are types of Katana swords and are one of the finest and expensive ones available in markets nowadays. Which one of these do you like the most? 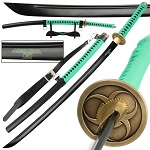 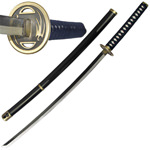 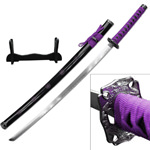 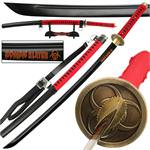 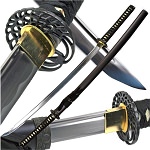 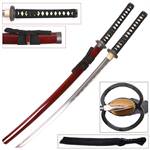 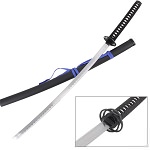 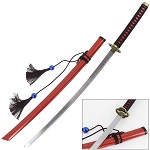 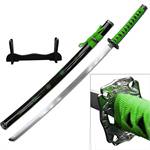 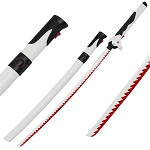