All people have the right to walk freely in the streets, day or night, in complete safety. There are too many people who prey on the unwary who infringe on that right.
You take your life into your hands whenever you leave your house, no matter whether you are taking the mean streets, visiting the ill-tempered boulevards, walking the cheerful side roads, or wandering the morose and salty alleyways. It's up to you to protect yourself, and you have to know not only a few self-defense techniques, but to be prepared to act if necessary.
It's not recommended that everyone carry self defense weapons with them, unless they prefer to own a gun and your local laws permit it, but everyone should have at least a basic method for protecting their money and themselves against jackals. Whenever men or women are confronted with a situation requiring quick action, they need all the help they can get.
There are many different ways to protect yourself from an attacker. A self defense weapon is any object which can be used against an assailant as a result of threats or aggression.
Some forms of weapons are more effective than others when defending against violent acts but it's not always about what you're holding in your hand- knowing how to use it is just as important.

Self defense knives are knives that are marketed for personal protection and use in combat situations. They are distinguished from other types of knives by their self-defense oriented features, such as a serrated or razor blade, a blade meant to survive contact with bone, or some sort of guard that protects the hand from an opponent's strikes.
Self defense knives are sometimes sold in places where weapons restrictions may prohibit the sale of more traditional weaponry and blades. These defensive knives have also been used by military personnel and law enforcement officers who must carry firearms but are prohibited from carrying edged weapons.
Self-defense knives may be carried openly in public without any legal restrictions on their possession due to them not being considered concealed weapons.

A police officer can be a hero in seconds. Whether they are responding to an emergency or stopping a criminal, they must have expandable batons on hand at all times to deal with dangerous situations. These self defense weapons are often used to disable criminals if the officer needs their hands free for other tasks, such as gaining control of the situation or using their taser.
The average length of a police baton is 18 inches while the average weight is around 10ozs. They are made from high-quality steel and come with a belt clip which allows easy carrying and storage without having to attach it to your uniform belt like some other types of batons do.
The batons can be divided into two types: the main types of expandable batons are fixed and telescopic.

The first type is fixed, which only extends to a certain length. This increases their thickness and is more balanced in terms of weight; however, it also makes them longer than telescopic batons.

The second type are telescopic batons which can be adjusted to a length that works for any situation without increasing the thickness or weight much. They come in different shapes and sizes for various purposes, around 12 inches long and 3ozs. 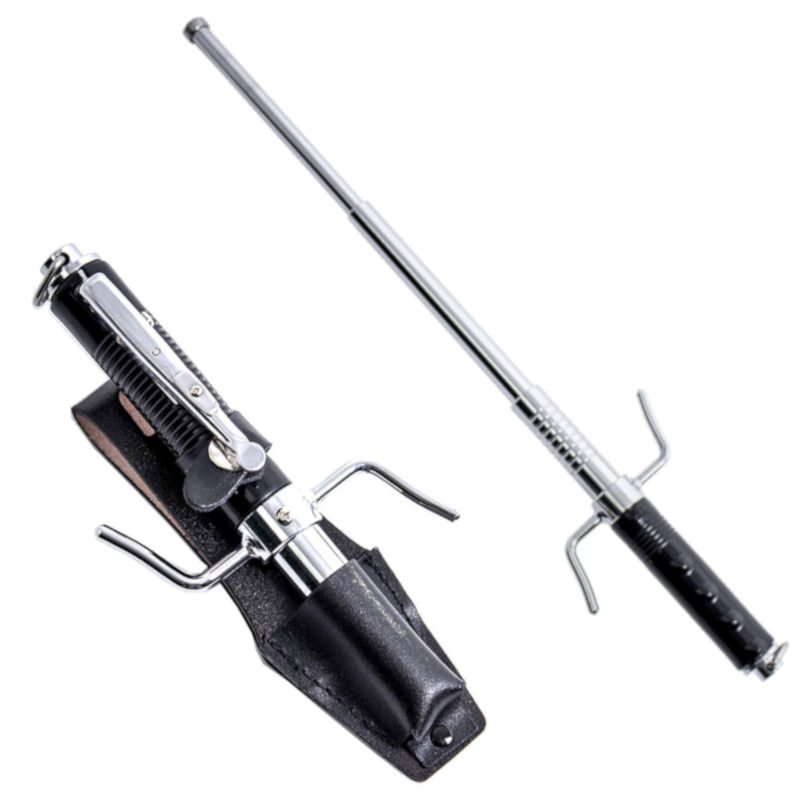 A kubaton is a simple but very effective tool for dealing with an onslaught, even if you will need to learn how to use it. Your natural instincts allow you to attack with your hands, and you can use your fist to strike anyone in your range with your edges and striking surface.
It is imperative to have this as a last line of defense, even if you have other options. You may be able to escape or possibly be harmed.

Self defense weapons do not all act as combat weapons; some act as distractions that draw assistance to you while terrorizing those who aim to harm you.
A push-button is used to set the alarm, which blasts loudly at 130 decibels, equivalent to the sound of a jet engine. A hidden off button, however, keeps the alarm from being shut down by an attacker, even if they get it away from you.

Self defense keychains, also known as key fobs, are a convenient way to carry around a small amount of self defense tools in case you ever need them. They are usually very easy to carry and conceal so that you don’t have to worry about carrying around bulky items or your self defense tools being noticeable.
Many people use these popular keychains for self defense purposes, but there’s no reason not to use one for anything else! They are the perfect way to hold onto items such as money and your car keys when not in use.

Having a tactical pen makes you a smart self-defense weapon because of their non-violent utility which is why they're so popular, and their elaborate Kubaton fighting mechanism, which is easy to learn and hard to master. Pens of this type are a new type that have proved useful in many situations as a handy tool to have on hand.

A stun gun, also known as a "conducted electrical discharge weapon", is a self defense weapon that is designed to temporarily incapacitate an attacker by delivering an electric shock. Although primarily intended as self-defense devices, stun guns have also been used as weapons of last resort by law enforcement officers and correctional facility personnel.
A stun gun works by discharging high voltage electricity through the body via contact with two metal electrodes connected to a battery pack made from disposable 9-volt batteries.
This energy travels freely along the path of least resistance, disrupting voluntary nervous system function in order to subdue or temporarily incapacitate the target. In some models, this disruption can be partially blocked by clothing worn over a portion of the body (e.g., underarms). 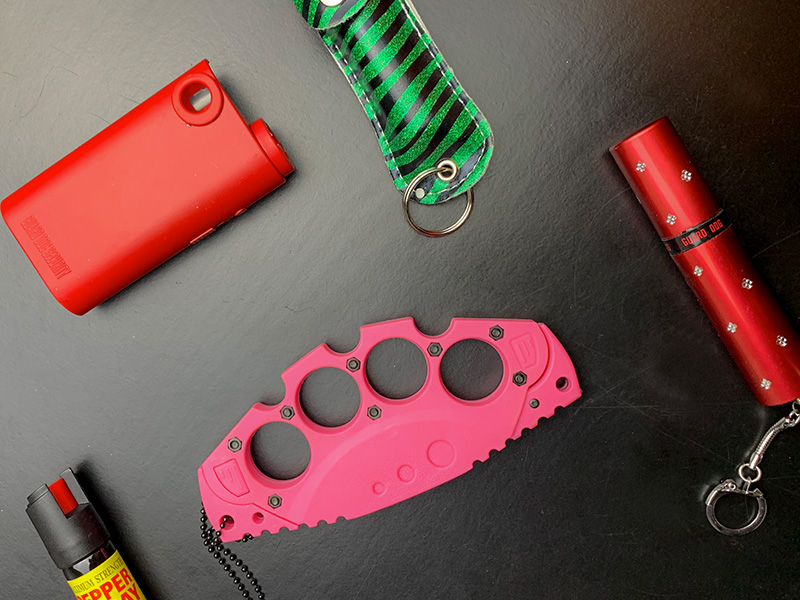 Pepper spray guns are the go-to self defense weapon in many homes today. But what is really a pepper spray gun and why do they exist? These devices are small enough to fit in your pocket, but when they're armed, they can release up to 2.5 ounces of pepper spray at a distance of 10 feet.
Pepper spray guns have been around since the 1920s and have been used for decades in both civilian and military settings as an effective deterrent against would-be attackers. As they are easy to use and highly portable, these types of weapons are famous for their qualities.

I'm sure you've heard of brass knuckles before, but what are they exactly? Brass knuckles are commonly used for self defense because they allow you to punch someone without the fear of damaging your own hand.
Certain members of the public who may be unable to walk into a store and grab some brass knuckles, however, might really want some for self defense reasons. If this describes you then worry not!
These self defense weapons have three or four prongs sticking out of them. This allows your punch to be much more powerful and also protects the fist from getting damaged. If you wanted to punch someone with a bare hand and caught your knuckles on their teeth, you would risk breaking something! This will not happen with a brass knuckle, allowing you to hit harder than with a bare hand. 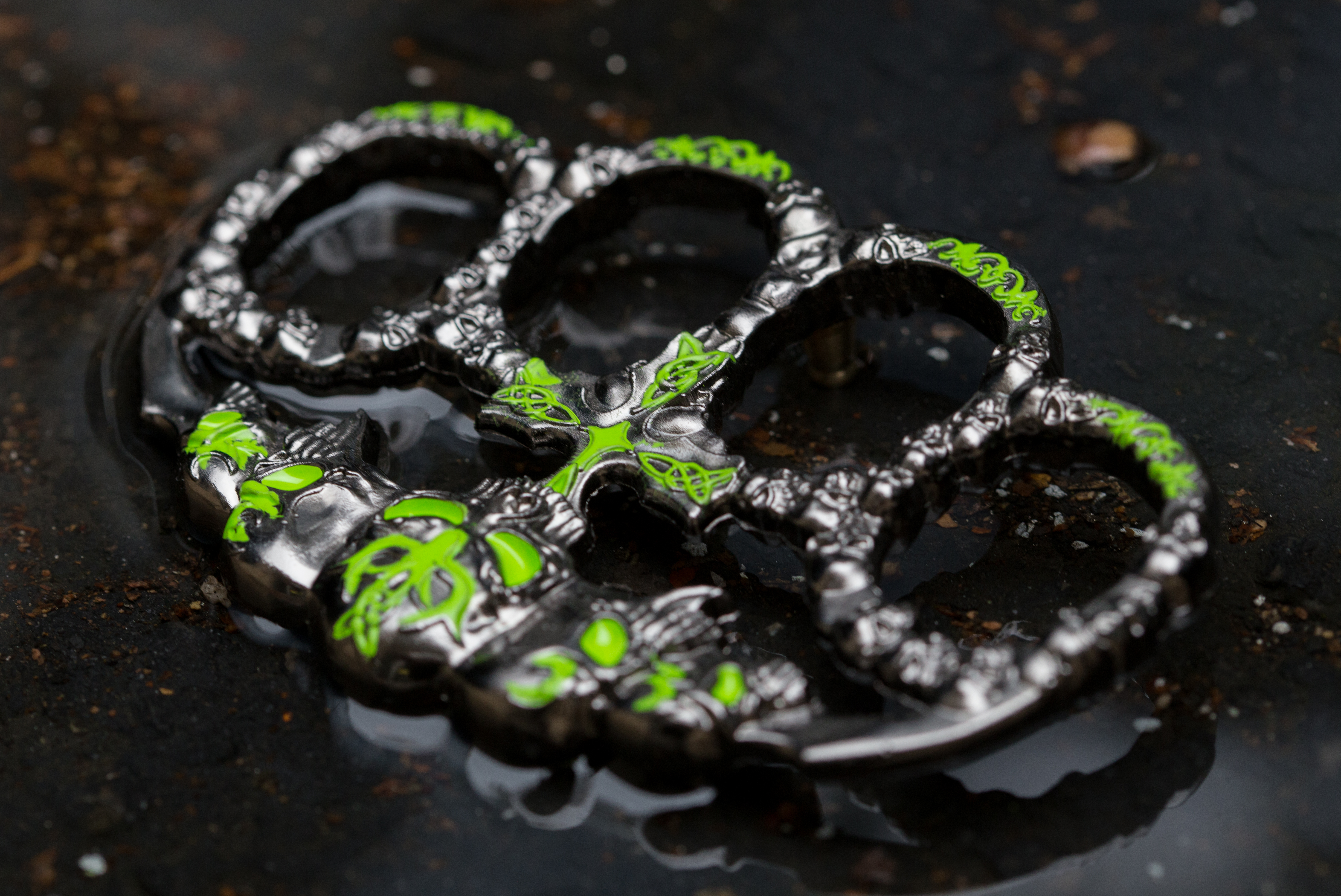 Read More: Can You Use Brass Knuckles for Self Defense?

If you're looking for a handy, reliable self-defense tool, look no further than your pocket. A good folding knife can ensure that you're always ready to defend yourself in an emergency - and has the added benefit of being legal in more places than pepper spray!
To find the cool pocket knives for self-defense, we recommend looking at our list of folding knives under $100. And if you don't want to risk accidentally stabbing yourself when using a knife as a weapon, make sure you practice using your tools for self defense on a regular basis.

Carry Your Self Defense Weapon Necessarily!

Armed with self-defense weapons that prevent violent crimes, you are probably more likely to be able to protect yourself. We only advise you to defend yourself or others with these weapons, and only a fool would try to provoke violent confrontations.
Although some people carry defensive knives or firearms as protection, it is more likely that they will injure themselves than an attacker if they are not properly trained to handle these weapons. Despite the fact that both stun guns and pepper spray are generally considered non-lethal, there is the possibility that they can be fatal if mishandled.
SHARE THIS POST
Previous Post
Next Post 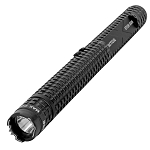 13.5" Tactical Rechargeable LED Stun Gun Baton
For safety there is a 3 level activation feature to prevent accidental discharge. Additionally, there is a built-in LED 380-lumens flashlight with high, low and strobe modes.. The baton is made of a military grade aluminum alloy shock proof exterior and is approximately 13.5 inches long. The stun baton comes with rechargeable batteries, which can be charged with the charging port or wall charger.
$19.85
0
Out of Stock