A Complete Guide to Different Types of Hunting Knives

A Hunting knife as the name suggests and most of our population think is a weapon to be used in hunting and killing animals; that means, it is used to perform the actual kill which is downright wrong and is a misconception. A hunting knife is a modified version of the hunting dagger which was used to stab and kill the animals.

In today’s world, hunting is done mostly via crossbows and most commonly via firearms i.e. guns and rifles. A hunting knife is a much-modernized version of a hunting dagger and due to current needs, it is only used to do what comes after the actual hunt i.e. to cut and slice the meat.

What is a Hunting Knife?

A hunting knife as we discussed above is a type of knife which helps us to perform a variety of tasks that we have to do during hunting. However, it does not help us to do the actual kill but only assists the hunter in the tasks that come after that.

For example, you can use types of hunting knives to skin an animal, butcher and cut the meat, slice it open etc. For performing each and every one of these tasks, we have different knives. There are so many different types of knives that we can use for hunting i.e. coping knives, butchering knife, skinning knife, Bowie knife etc.

Hunting knives are known to have a single edge on their blades instead of a double edge like daggers. But even though they do not have double-edged blades, they are still known to be very efficient and that is why they are used to perform the toughest of tasks that we have to do during hunting.

Some of the hunting knives come with a straight blade, whereas some of them have curved blades as well. Mostly, the knives that are used for skinning have a curve in their blades, whereas the ones that have straight blades are used more for cutting and butchering.

They come as fixed blade knives and as folding knives too. So, let us have a look at both of them.

Folding knives may not be that durable and powerful but yes, they are easy to carry and can be concealed as well. They are generally safer as well.

You open the website of an online store and start searching for hunting knives. The website shows numerous types of hunting knives which you didn’t even know existed before now.

Now what? Will you just buy the one that looks more appealing to the eyes? Because trust me appealing isn’t going to help you much when you will be preparing your food out of your hunt.

So, in order to select the best hunting knife for yourself, you need to know about the different types of hunting knives and how each one differs from the other. What advantages one type of knife has over the other and what are the various features and pros and cons of each and every one of them.

A Bowie knife is a very famous knife especially among hunters and has a legendary history too. Bowie knife was the knife of Jim Bowie and got famous when he used it at the famous Sandbar fight. A bowie knife is actually a fixed blade knife.

It is quite bigger as compared to other knives and its blade goes up to 12 inches long that ends up on a clip point. The blade of a Bowie knife is curvaceous and it features a cross guard for secure grip.

The Sandbar fight took place in the early 19th century on a large Sandbar located on Mississippi River. Jim Bowie pulled off amazing stunts with the Bowie knife and that is how it became famous.

People became a fan of Jim Bowie and his knife after the Sandbar duel and after that Jim Bowie was reported to always have his Bowie Knife besides him especially in fights and combats.

Apart from its use in fighting, a Bowie knife can be used as a utility tool and as a hunting knife. It has a long, large and bulky blade that helps in cutting and slicing the meat easily.

A camp knife is another type of hunting knife. It is a well-rounded knife and is famous for its large drop point that is quite effective in performing lots of tasks especially related to camping. Hunters mostly do hunting when they are out camping, so yeah a camping knife proves to be quite useful to hunters.

A camp knife can be used to prepare the food, cut woods, or do other campsite tasks. A camp knife is a classic knife and hunters usually keep them in their collection. The handle of a camp knife is quite strong and provides a secure and strong grip. However, it is larger too as compared to the handles of other hunting knives.

A Caping knife is one of the most popular hunting knives. Why? Well, it gives you the trophy to decorate your living room and provides you a monument of your hunt to boast about. Still confused?

Well, a caping knife is used for the head of the animal you hunted and keeps its neck preserved and allows you to cut it in a proper way so you may get an animal trophy at the end. So, a caping knife is a very important type of hunting knife especially when you are out hunting deer's, bears and, boars.

Isn’t it? A caping knife is rather a strange looking knife having a large handle but a small blade which is slightly upturned from the end. However, a caping knife is not only limited to caping and serves other useful purposes as well.

A skinning knife or a skinner knife are the names of the same knife and also performs one of the most important tasks of hunting which is of skinning the animal. A skinning knife has a short blade with a wide belly and looks like a stout person, literally. Lol.

Its blade slightly curves from the end. The professional who does the skinning work is known as a skinner. A skinning knife may be small but it is strong enough to perform the task efficiently, therefore its blade should be razor sharp always. It is not flexible much but a skinning knife does not have to be flexible after all.

It is mostly twelve to seventeen centimeter in length, however, some boning knives are bigger than this length as well. They are not as thick as butcher knives but still perform the task quite efficiently.

They are good for cutting and piercing. It is the knife which does the real task of preparing the meat and is the most common form of a hunting knife.

A Buck knife is another type of hunting knife. Buck knives were made specifically for hunters, however, they are now used for a variety of tasks. They became popular in the 1960's and buck knives are available in different styles worldwide.

However, there is this one popular Buck knife that is quite famous and popular than the other ones. It is the Buck Model 110 Hunting Knife which was designed in 1964. It has a blade which is 3 ¾ inches long and a handle made up of wood with bolsters of brass.

It has a strong locking mechanism and was quite effective for cutting, skinning, and butchering. However, it can also be used for utility purposes. It is actually a large hunting knife, however, it is not a fixed blade knife, rather it is a folding hunting knife.

This folding knife design also makes it easy to carry and maintain. Buck knives mostly feature clip point blades and are one of the finest hunting knives.

The above-mentioned types of hunting knives are the most popular and widely used types and you must definitely have them in your hunting set collection if you consider yourself an avid hunter. 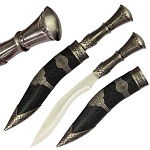 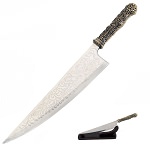 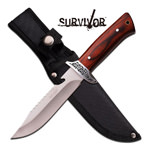 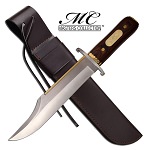 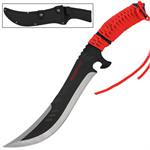 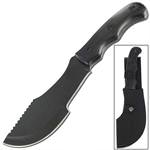 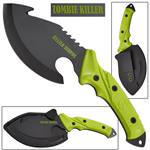 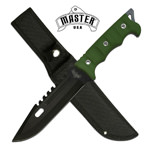 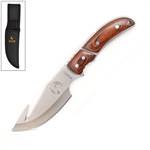 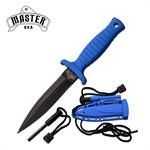