Posted by Wholesale Blades on 7/2/2019 to Self Defense

Ninja swords are the most obvious thing a ninja martial artist needs to own. Of course, the aim is to become a powerful warrior like the ninjas. Hence, you can’t ignore to have these swords. Ninja sword is one of the prominent ninja weapons used by the ninjas during ancient times.
The primary weapon of ninjas was the sword. In fact, it was a time when the sword was the main weapon used for fighting the enemies. So, ninjas had swords in their hands to battle their enemies.
Undoubtedly, ninjas were the most skillful and powerful warriors when equipped with the swords. They used these bladed weapons as their main defending and attacking force. They had an immense level of skills to defend themselves with their swords and injure their enemies.
Indeed, ninjas had spent time on learning and practicing how to use the sword to gain an upper hand in the fights. One of their most prominent swords is the katana. It was a long bladed sword with a thick blade and a slight curve at the bottom.
The modern-day ninja martial artists must have the swords used by the ninjas. This would give them an idea about how they used swords to their advantage. They can learn the techniques used by the ninjas to battle their enemies with the swords.

Ninja martial artists must do everything to upgrade their skills. Hence, they should have things that let them enhance the skills, such as training swords. Training swords are not exactly ninja weapons, but they are certainly a part of daily needs of martial artists.
What makes ninja martial artists perfect in their work? Indeed, it is a practice which makes someone perfect. So, they need to train hard in order to achieve their goals. Like a person doing gym has a target to lose weight or gain some muscular strength, martial artist also have goals like increasing their skills.
One of the obvious goals of these professionals is to learn using swords. To do it in a safe manner, training swords can help. Training swords refer to swords made for practice purposes. These are often made of foam so that a beginner comfortably practices.
Foam swords are usually common for cosplay, but martial artists should also have these swords just to make sure they avoid injuries while practicing with swords. It is necessary to practice for as long as you can before getting your hands on the real swords.
Several martial artists suffer injuries when they are practicing their sword using techniques. These training swords are exclusively made for training purposes. They ensure safety because they are made of foam which is perhaps the softest material. So, prevent injuries and use these training swords for practice!

Wooden swords, as the name suggests are constructed using wood. Don’t think that they have steel blades and the handles are made of wood. Everything is made of wood when we consider wooden swords.
Like foam swords, these are also training swords. But, don’t ignore your safety because they are not as soft as the foam swords. However, ninja martial artists can use them for training.
So, why they should use wooden swords when they already have other training swords? Wooden swords are also a necessity because they are durable and provide a more realistic use of swords. Yes, foam swords are safer but when your aim is to experience a realistic use, prefer wooden swords.
Wooden swords are available in different shapes and designs. You can get a wooden katana for practice from the market. You can easily train yourself and learn using a katana to defend yourself against the enemies. Hence, if not many, at least get a wooden katana in your arsenal necessarily.

Since we are enlisting some essential ninja weapons, we just can’t miss the nunchucks. Nunchucks or nunchaku is a popular thing among the martial artists. You must have seen them using or playing tricks with this small weapon.
It is a defensive as well as an offensive weapon. Made of wood or steel at times, it can inflict a severe injury. It is usually a pair of sticks made of wood and connected using a rope. However, sometimes a chain or a chord connects the two sticks.
Nunchaku is one of the traditional weapons used in Japan. However, there is no evidence that ninjas used this weapon. Rather, it became famous when it was seen on the big screen. Bruce Lee often used this weapon for fighting the odds in his movies.
It was not an unpopular weapon in Japan, but in America, it became popular in the late 1980s, thanks to Bruce Lee. He had an immense level of skills to perform different tricks with the weapon and displaying a wonderful martial art. Seeing him for the first time would blow your mind.
Now, coming to our main talking about, why a martial artist requires such a weapon. If you don’t know, many martial arts schools make the students learn different techniques with nunchucks. The students learn how to defend themselves using this weapon and how to do strikes with it while battling the enemies.
Furthermore, students learn to perform different tricks with this cool weapon. As a martial artist, you need to learn different defensive techniques, and there is no better weapon than a nunchaku in this regard. So, essentially get a nunchaku in your arsenal.

Ninja Stars are the iconic ninja weapons used tactically by the ninjas. There are other names associated with these stars, such as throwing stars and Chinese throwing stars etc. However, because ninjas made them famous, these stars would always remain the ninja stars.
What exactly is a ninja star? As it sounds, it is a star with a few edges. Ninja used it as a tactical weapon for distracting their opponents. During wars, ninjas used it for maiming because it was not a weapon to kill.
Ninjas threw it on their enemies to cause injuries to their heads. Also, the stars were embedded on the ground to injure the feet of those who stepped on them. So, the ninja stars were quite handy in such situations.
Since ninja martial artists need to express themselves as the real ninjas, they must utilize all the fighting techniques and strategies that ninjas used. So, it is necessary for them to have all the ninja weapons, including ninja stars.
Such weapons would allow them to learn maximum fighting and defensive tactics. Also, this will enhance their fighting skills. So, they should necessarily have them in their arsenal.

What About Other Necessities?

Well, for ninja martial artists, there are many necessities other than ninja weapons. Yes, the things mentioned above are essential, but there are a few other things like sparring gear and martial arts uniform. This is the necessary equipment which ensures the safety of the artists while practicing. Of course, you need to wear the uniform because it is the appropriate clothing for training. Also, sparring gear ensures your protection from injuries. So, being a martial artist, never ignore such necessary things as well.
SHARE THIS POST
Previous Post
Next Post 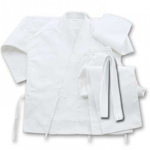 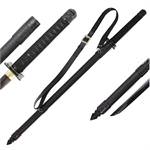 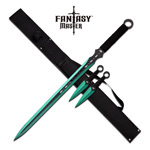 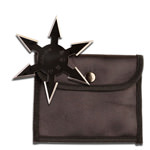